January’s 30 Day Experiment was about drawing boundaries, living in the present, and giving my family my undivided attention. Eliminating distractions helped me really enjoy my interactions with people. So I decided to make my next experiment all about great conversations.

For February, I called a friend or family member every day. This was a daunting commitment, but I was excited to get started.

After completing each conversation, I recorded the date, person, a brief note, and time in minutes into an Evernote doc on my phone. There were a few multiple call days. 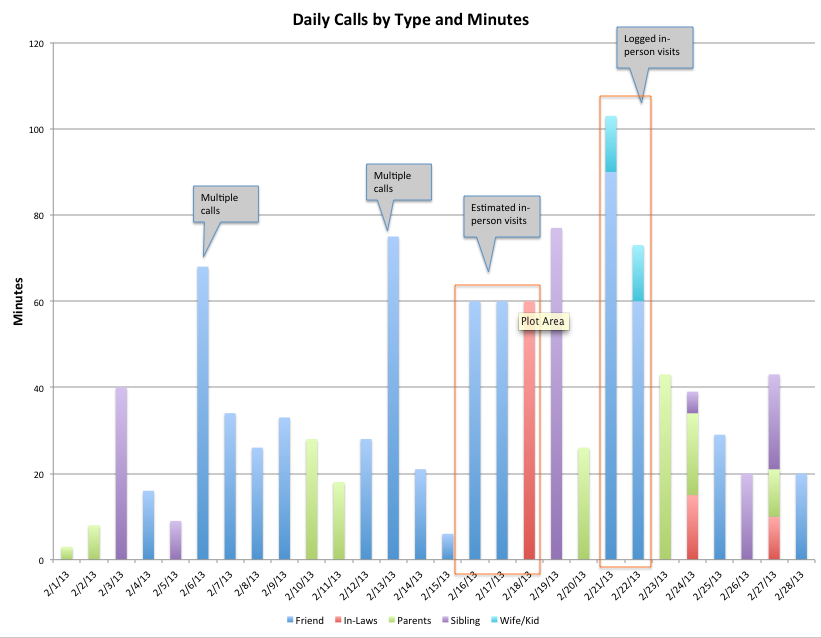 Here’s the raw data. I’ve removed the person I spoke with and the topic of our chat, since that’s private.

But what did I really learn?

I tweaked the rules a few times. First, I decided not to make calls on days when I was staying with family or friends, since I decided this would be against the spirit of the experiment. My goals was to have great, uninterrupted conversations, not make phone calls.

You might think it would be difficult to set aside 20, 30, or even 60 minutes per day to catch up. It’s really not at all. The tough part was actually finding people to fill those slots. For the first few days, I’d go through my address book and serendipitously place calls. I quickly realized that I wasn’t likely to succeed without some planning.

On February 5th, I went through Facebook contacts and dug deep into my address book that dates back to the late 1990s. I sent messages to 12 friends, laying out the experiment and asking for a 15 minute window. Here’s the note I sent.

So, I’ll cut to the chase. I just want to find out how you’ve been and share family news. I’m doing a 30 day experiment where I’ve decided to catch up with a family member or old friend every day in February. Rather than just drop in haphazardly, I’d love to schedule something. 10 or 15 minutes is fine. I certainly have a lot of family news to share, I’m sure you do too.

I’m pretty flexible during the day — lunch is free most days, and I’m usually free in the afternoon too. I’m usually knocked out 5:45 – 9pm EST with bedtime routine.

If you have any time this week or next, drop me some times and I’ll make it work.

(This is my second 30 day experiment. Last month, I limited email checking at work and did not use my mobile phone around the family. The former I will try to keep up. The latter is a permanent moratorium, and I’m happier for it.)

These were all old and dear friends, but even I was surprised by the overwhelmingly positive response. It was basically a form letter, but it was honest and compelling: hey, I want to talk to you. Let’s not waste small talk on email. Let’s catch up now!

My hope was 5 enthusiastic people, and maybe two booked slots. Within 24 hours, 11 of 12 had given me an enthusiastic yes and everyone wanted to talk within the next two days.

One of my big takeaways is that there’s a huge potential for participation in experiments like this. My friends wanted to be part of my shared experience. There was a beautiful urgency too — only 30 days to be be involved. In most cases, we hadn’t spoken to each other in years. We weren’t going to let it go any longer. The chance to catch up, the time sensitivity, it was all as powerful and compelling as direct marketing, but it was purely in the spirit of sharing and joy. I want to keep thinking about this participatory aspect and how I can involve my friends more often.

A 5 minute call is infinitely better than no call

When you talk to someone regularly, you get to be involved in the daily aspects of their life. It’s obvious, I’d forgotten this, and rediscovered it accidentally while making a lot of late night “safety” calls to family to keep my streak alive. I learned about my brother’s new job, my sister’s dissertation, illnesses in the family, and I helped my mom make chili. These are the sort of random things you do when you see someone every week. It only takes a 5 minute call to stay up to date. It was really nice.

I did more listening than talking for possibly the first time in my life. Partly intentional, partly by accident. One consequence of doing a lot of catch-up calls was that I often repeated details — I live here, work there, married, have kid — and hence became acutely aware of how much time I spent talking versus listening. By mid-month, I’d become a stellar listener. I’m sure it can’t possibly last.

This was a very demanding experiment, but also a very rewarding one. Having family in the Eastern, Central, and Pacific time zones gave me some flexibility to make early morning and late night calls. I can see myself repeating it once a year or so. In the meantime, there are a dozen or so folks I wasn’t able to connect with, and I’ll be reaching out to them before I lose my momentum.

Oh yeah. There is one more thing…

I grew my first-ever beard. How is that related to calls? It’s not. I was a few days into February when a boisterous conversation on beards erupted on a Google Group I follow. Not having shaved yet for the month, I decided that a beard would be my backup in case I couldn’t stick with calls. Like a friendship, beards take time to cultivate. The best advice I heard when getting started was “Don’t shave.” BEHOLD! 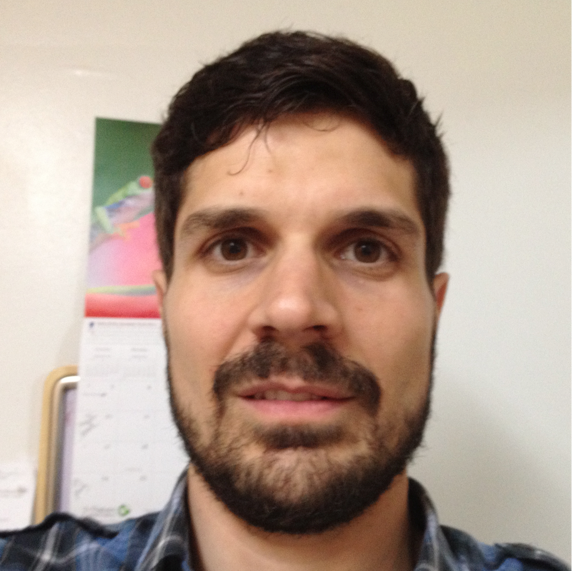 I’m completely hooked on 30 day challenges. They are, as Matt says, life-changing. 30 days is short enough to commit to something difficult and ambitious, but long enough to experience real self-discovery. Both in January and February, where I ended up was different than where I began. Both months have been full of wonderful surprises.

So what’s next for March? I do want to build on the themes of changing the way I interact with people. January was reclaiming time and learning to “be there”. February was use that reclaimed time for deep conversations. After catching a glimpse of what it’s like to be a good listener and deliberate on my own words, I really wanted to try an experiment in introversion, with constraints on how much I communicate. The more pressing deficiency in my life, however, is my physical health and happiness. I used to be much more active and I ate better and slept more. So that’s March. I’ll see you back here in 30 days.

10 thoughts on “February’s Experiment: Call a friend or family member every day (and grow a beard).”