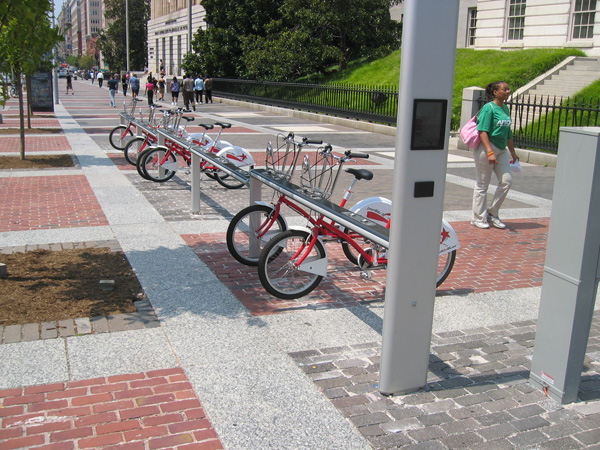 According to SmartBike’s website, 10 locations opened today, and the one I visited (Gallery Place) had about 12-15 slots for bikes. This is a far cry from the 750 lockup stations and 10,000 bikes that Paris launched on its opening day (they’ve since doubled both numbers), but still infinitely more than have ever existed anywhere in this country. 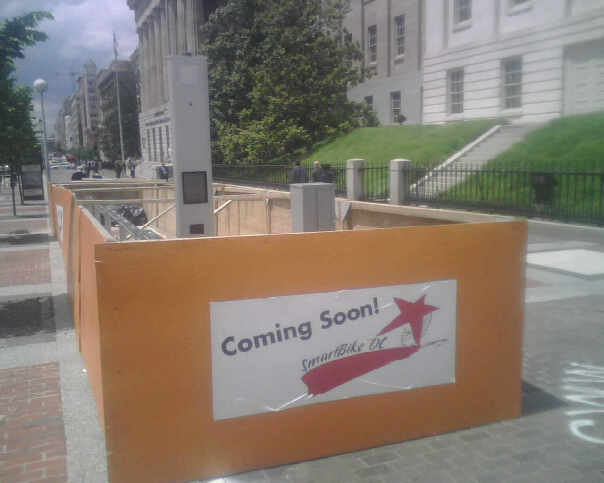 I snapped this with my phone a few months back…

Washington, DC is the first U.S. city to launch a public rental-bike program like the one that launched last year in Paris. Like France’s model, DC’s bikes are underwritten by a corporate sponsor — in this case ClearChannel — who will get exclusive rights to sell the banner advertising on the bikes or at lockup stations. ClearChannel was the jilted loser of Paris’s sponsorship decision. The Paris experiment was part of the Paris Mayor’s program to relieve Paris streets and also included 125 miles of new bike lanes.

The activist in me is absolutely thrilled with this HUGE and very welcome step to make DC commuting more friendly. As groups like WABA will tell you, laws protecting cyclists are great, but what really helps turns cities around is increased participation in cycling. We need more bodies out there running errands on bikes, commuting on bikes, and driving demand for better laws, better commuting facilities, and better bike paths.

The rider in me thinks the bikes look pretty sweet. They all have front/tail lights and small baskets for carrying Cargo. The frames have adjustable seats and a low standover height so that people of all sizes can use them. They’re red, just like my first Schwinn. They’ve put the pilot lockup stations in some of the best neighborhoods in town, so I think we’ll see both tourists and residents take advantage of the program. 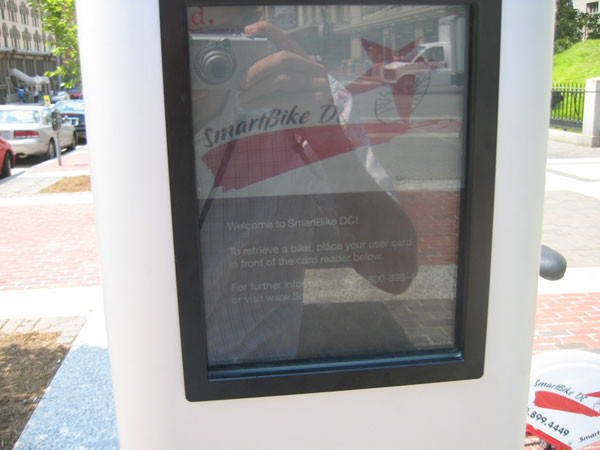 (You signup for SmartBikes — on their site I believe — and you receive a card that you swipe at the kiosk to release a bike. They don’t offer bike locks outside of the station lockup yet.) 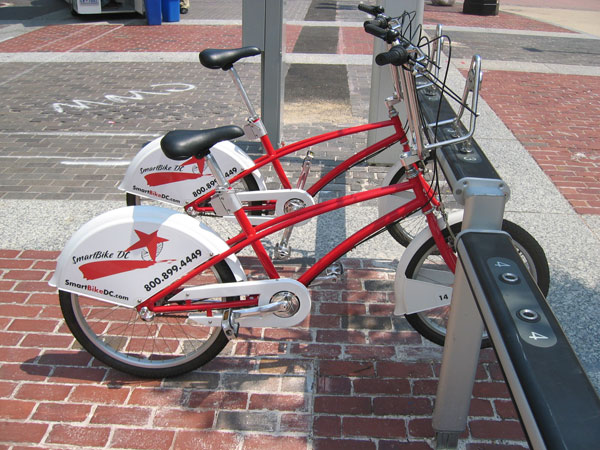 However, the mechanic in me is wondering how these bikes will hold up against normal wear and tear. It sounds as if ClearChannel is on the hook for normal maintenance. Regardless of whether the city or ClearChannel spec’ed the bikes, I definitely think they could’ve made some better equipment decisions.

The three-speed drivetrain is the least of my concerns. The Shimano internal hub shifting is durable and fairly low-maintenance. It’s not a bad choice, considering most users on errands or casual riders would want the benefit of some gears, and this is a way to give it to them without exposing complicated parts to abuse. I’m more worried about the cables, which will corrode over time as they are exposed to rain. If they could’ve routed all cables internally, that would’ve given them more shelter from the elements, since the bike stations don’t have roofs. It was also a no-brainer to add chain guards to keep pant-legs out of the drivetrain. 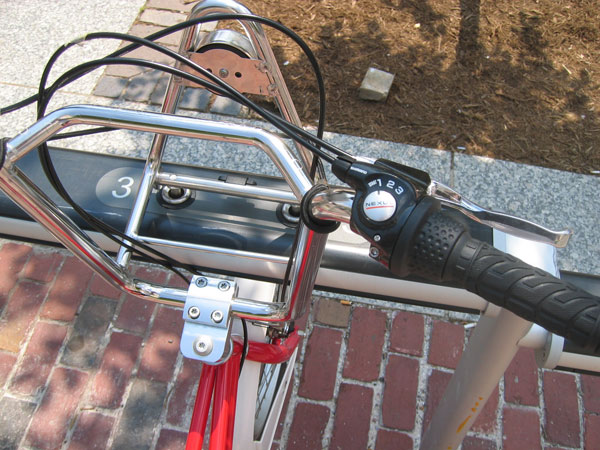 The wheels and tires are more problematic for me. They’re using tires smaller than the standard 26 inch cruiser (I didn’t check to see whether they are 24 or 20″), and the wheels are high gauge spokes. That will make them stronger, but they’re still going to suffer a ton of normal abuse. Why not use solid plastic wheel with molded spokes, which won’t ever come out of true and are just about bomb-proof. The tires were all freshly pumped up today, but I don’t think they can keep them inflated regularly. Why not instead use solid rubber tires that can never get soft and never get punctured by the glass and potholes of DC streets.

Solid wheels and solid tires will be much more consistent from bike to bike and they’ll age much slower. You won’t get a bike with perfectly round wheels and perfectly pumped tires one day and a wobbly-wheeled lemon the next. The most common mechanical, a flat tire, will be non-existent. Of course, the wheels are going to be heavier and less fun to ride IF you have your own bike that’s always perfectly tuned, but are those the people who are going to be using the service? These bikes aren’t meant to do anymore than short trips — short in terms of length and distance. Riders aren’t supposed to take them outside the district and there’s some hint that they don’t even want you locking them up except at lockup stations. 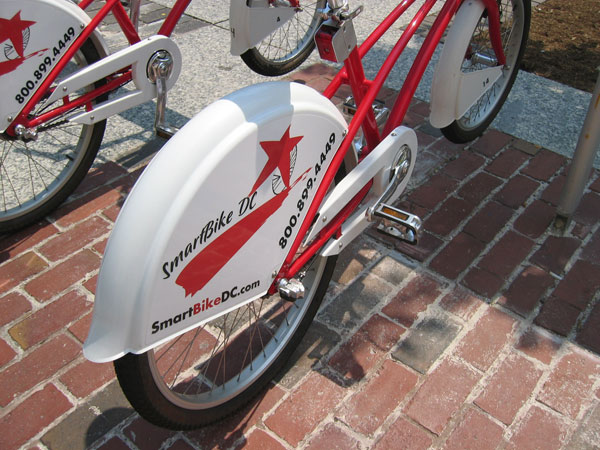 I’m guessing one factor in the choices was cost. The Paris bikes were rumored to cost as must as $1400 per bike. SmartBikes will charge$550 for a lost/stolen bike, so that may be some indication of the cost of the bike which also includes an expensive lockup harness.

I don’t want to send mixed signals, I’m absolutely delighted DC is doing this. I also want to make sure that the the underwriters are prepared to see this program succeed.

2 thoughts on “Smart Bike DC Launches. Will the Bikes Last?”