Last weekend we visited two of my oldest friends from Atlanta who moved to western Maryland last summer. Kieran is working remotely for IBM and Matt is managing the new artificial whitewater course at Adventure Sports Center International in McHenry, MD. They also manage four beautiful kids who keep them extremely occupied. After a long night of catching up, the kids woke us up early on Saturday for several hours of errands and field trips. I merely had to keep all four alive (harder than you think, and I can elaborate) long enough to give mom a quick break and then we were off to the race. Though officially opened a month to the day of the race, ASCI was hosting the 2007 US National Championships. 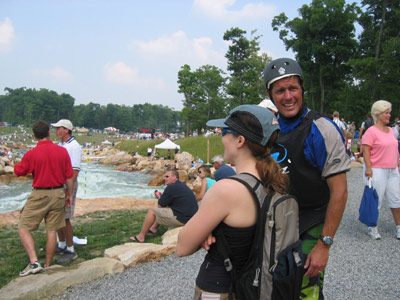 I was lucky to have Matt and Kieran indoctrinate me as a spectator long enough ago to have watched Matt qualify for both the Sydney and Athens Olympics. Whitewater slalom is the most exciting live sport I’ve ever watched and defies description. At first it really seems like controlled chaos. Paddlers either have a strong understanding of fluid dynamics (the science), a vocalized spirituality about how the water wants to flow (the art) , or both. Either way, they understand they can only go where the water permits, and maneuvering is about choosing the right line and hoping for the best.

Many conservationists, myself included, are big proponents of responsible outdoor recreation. It’s difficult to convince the public at large to protect something if they don’t see the value in it, especially if they see value in destroying it. ASCI will bring whitewater to a large group of individuals who would never attempt to paddle a wild river. One of the center’s draw is its close proximity to other resort activities, and though it can be as dangerous as a wild river, it will have a higher margin of safety purely because any emergencies can be addressed more quickly.

The ASCI course has received a ton of favorable publicity, including an excellent piece that Chris Davenport wrote for the Post. The best publicity will be word of mouth, not just in the community of veteran paddlers, but also in the recreational paddlers and observers the course draws.

Of course, artificial courses are also outstanding for racing; they cooperate better than wild rivers and they’re more spectator-friendly. We all agreed that the ASCI crowd of onlookers was the largest any of us had ever seen at a whitewater slalom event. More than any past National Championships, more than Olympic Team Trials, and more than the World Cup race I’d watched in Bratislava Slovakia in 2003, held on a manufactured course on the Danube (the Europeans absolutely love paddling).

Besides biting off the National Championships in their first few weeks of operation, the race also hosted an international paddling contingent that included 4 Iranian women. Actually, Iran doesn’t yet have a whitewater team; the country is looking to develop a team for 2008. In fact, the 4 women racing had only been paddling whitewater for two months, yet they were absolutely fearless. The crowd was warm and enthusiastic whenever any of the four were on their runs, and I think we were all more nervous than they were. 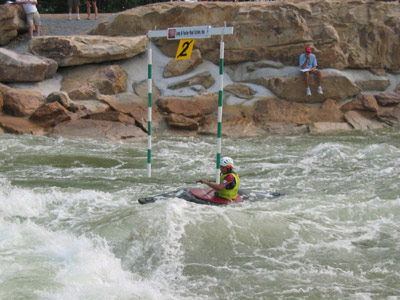 A woman from the Iranian Team on her 2nd Run

My Farsi is almost non-existent, but I did get an opportunity to wish one of the Iranian women good luck as she observed the currents before her second run. She said she was from Isfahan, was very happy to be racing, and that the course was “very hard.”

The Economist had a full survey on Iran a few weeks ago. It examined the current strained relations with the US and wondered whether our two countries would stumble into war. (If you don’t read the article, the conservative Economist concluded that war would be a costly mistake, most likely driving a pro-US Iranian public towards its entrenched government).

Iran is a young country full of friendly, educated, pro-American people, four of whom raced graciously in Maryland last weekend. It was a very positive event for all racers and spectators involved and even if it went unnoticed in the mainstream media, I hope that the folks up the street in Washington keep this American/Iranian goodwill in mind as they formulate policy over the next 18 months.