How honest are your neighbors? Jen and I were forced into relying on their integrity, and we were pleasantly surprised.

On July 4, we’d advertised a yard sale on Craigslist to get ready for our move to D.C. I was stationed conspicuously in a lawn chair, still in a hard cast and quite immobile. I was the best person for the job both because I couldn’t actually do anything besides collect money and also because I elicited a lot of sympathy purchases.

Then, Jen cut her right knee very deeply while trying to move a huge mirror downstairs to the sale table. (In a lapse of reason, we both thought it was a dreadfully bad idea that she was trying to move a 30 pound mirror that was nearly as tall as she was, yet didn’t vocalize it.)

We had to make a dash for the emergency clinic for stitches. At the same time, we had to get rid of our yard sale items one way or another. Jen wrote out a sign on a large piece of cardboard:

Clothes and Books 50 cents Each. All other items $1. Leave money in mailbox. 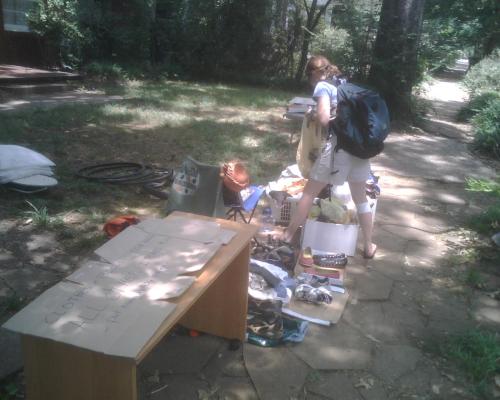 If you’ve read Freakonomics, you know the story of the former government economist who started his own bagel business. He dropped off bagels to dozens of offices each morning and left an “honor” collection box. Overall, he found that he recovered 95% of the money to which he was entitled. His business model relied on him collecting around 90%, so this meant he turned a profit. (Not surprisingly, he found that the most honest floors were the worker bees, while the executive floors had a loss rate of nearly 20%. Good thing I don’t have any corporate executives in my neighborhood.)

Jen received 8 or 9 staples and a healthy dose of antiseptic. When we returned home, we were initially dismayed to find only a few dollars in our mailbox. We had such high expectations of the integrity of the people on our block. But when we checked the mailbox for the other apartment in our duplex (it is the more obvious of the two) and were pleased to find a total of $11.50 between the two. Our neighbors are honest!

The money slowly trickled in as we packed upstairs. Then, it was time to go to a going away barbeque at Jeff and Kris’s house. When we returned after 3 hours, we found nearly another $20 between the two mailboxes. I realized that we’d achieved “passive” income!

For us, we had nothing to lose by leaving our items out on the curb. Anything that didn’t sell was to be donated, and we donated quite a large number of goods throughout the process. What was priceless to us was realizing how large-hearted all of our neighbors were. We’d lived in this neighborhood for years, and our parting gift was learning that these people were even more good-natured than we thought possible.