Just now sifting through the footage, and I’ve once again proved that I have no creative direction.

Here’s a post-race pizza party interview with Moto Mark, one of the ringers from the ‘Pee on the Butterflies’ team.

I don’t follow fake wrestling or its history, but Kevin Hench of Fox Sports chronicles pro wrestling’s far too lengthy history of tragic endings. I believe I counted 20 wrestler deaths (not including Chris Benoit’s family) that Hench documented since 1984. With the exception of a few accidents, almost all of the deaths were overdose, suicide, or premature heart attack.

Once the tabloid journalism dies down, I will be highly surprised if we don’t see more debate around the issues Kevin Hench raises.

If only I’d known this little tactic earlier. On two occasions last week, my commute home was over an hour and a half. Ridiculous. 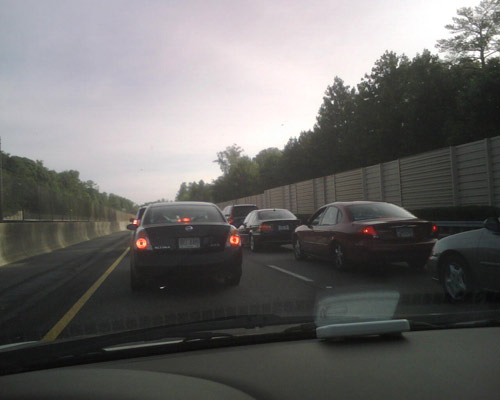 Isn’t it dangerous to use your camera phone while driving? Not when you’re going 0 and still 2 miles from the 400 toll.

In a stunning ruling that set a precedent for common sense, District of Columbia Superior Court Judge Judith Bartnoff found in favor of the defendents in the Washington D.C. dry cleaning case. Plaintiff Peason was ordered to pay court costs, which will tally about $1000.  Nevermind the thousands of dollars the Chungs racked up in legal fees.

The case has received international coverage and been widely ridiculed.

It has been said that Green is the new Black, as all marketers jump on the eco bandwagon. The NY Times reports on Atlanta-based Home Depot’s new Eco Options campaign, which features and promotes environmentally-friendly products.

Home Depot VP Ron Jarvis heads up the campaign and scrutinizes potential products for their environmental merit. There is no shortage of interested companies hawking products, and Ron acknoledges that it is mostly hype or “voodoo marketing.” While the article paints a flattering picture of Mr. Jarvis, it also notes criticism from consumer and environmental groups that highlight the fact that Home Deport continues to be a (large) retailer of non environmentally-friendly products.

Regardless, it sounds like Home Depot has put the right man on the job. I was very pleased to see Mr. Jarvis thinking about the total lifecycle of a product when considering its environmental impact. Some products have an eco-friendly consumption footprint, though when you examine the entire product lifecycle, including production and disposal, the negative can outweigh the positive. Mr. Jarvis mentions a corn-based rug. Economists as well as environmentalists continue to debate whether corn is really green.

NY Times: At Home Depot, How Green is that Chainsaw?

On Friday, Science published a study conducted by Norwegian doctors on 250,000 military conscripts. The study found that eldest children enjoyed an IQ boost of nearly 3 points.

The study’s finding that psychological factors — interaction of parents and children — and not biological ones account for the IQ discrepancy is fueling a raging debate this week. It will no doubt rile existing sibling rivalries and cause conscientious parents like mine to second guess every interaction they had with us growing up. Did they give us all equal attention? Did they show favorites? Did they ignore someone’s hidden talents?

Let’s explore. I am the oldest of 4 children. My parents took twice as many photos of me and saddled me with all of the responsiblity and expectation you expect of a first born. I attended a presitigious public university and graduated with a humanities degree. My younger brother, more introverted and more modest, graduated with a BS in electrical engineering from one of the nation’s top programs and is currently finishing his Masters degree in mathematics. The older of my two sisters received her Bachelors and Masters degree from one of the nation’s best accounting programs and was also captain of her NCAA Division I gymnastics team. My youngest sibling, also a gymnast, who by the study’s method should probably be the least intelligent, is about to start her PhD program in biomedical engineering. (Disclaimer: neither I nor any of my siblings are Norwegian military conscripts.)

On paper at least, you can see why I would be reluctant to test the doctors’ findings with an IQ test. I know none of my siblings would care. The only persistent rivalry is a bet my brother and I made a long time ago: whoever has the most hair and whoever is the tallest at age 35 wins. Height and hair seem to be far more substantial than 3 IQ points.

Accelerade, a sports drink that has been sold for years in specialty running and cycling shops, is having its coming out party. As part of the promotion, Accelerade has ultramarathoner Dean Karnazes attempting to break record for most miles run on a hamster wheel in 24 hours. You can view the event live today Accelerade’s website.

Personally, I think riding a 24 hour mountain bike race gets monotonous enough, riding the same lap over and over. I can’t even imagine how grueling (and incredibly boring) it must be to run indoors on a treadmil.

END_OF_DOCUMENT_TOKEN_TO_BE_REPLACED

After finding poisonous melamine in pet food imported from China, consumers have also discovered melamine in cheap imported Chinese toothpaste (as much as I rag on the ADA for being a bunch of whores — which they certainly are — you should look for their logo on your toothpaste). Now consumers are discovering lead-based paint in children’s toys. Another report showed a plastic eyeball filled with kerosene. Last year saw a record number of product safety recalls for products manufactured in China. Nice…

American consumers are demanding greater oversight of imported goods. Of course, the NY Times is all over this. But didn’t SNL’s Consumer Probe scoop this back in 1977?

Joan Face: My guest tonight is Mr. Irwin Mainway, President of Mainway Novelties, and Chairman of the Board of Mainway Latex Corporation. Mr. Mainway, you are clearly the main flagrant offender in this area. For instance, your company manufactures and distributes this Halloween costume.. [ picks it up and holds it ] ..Johnny Space Commander mask, which retails for $6.95. It’s nothing more than a plastic bag and a rubber band. This is very dangerous for young children!

Irwin Mainway: [ grabs the costume ] Okay, I’m gonna say something about my product right here, Johnny Space Commander mask. I want to say, first of all, it’s a very fluid item, in terms of sales. I don’t know, Miss Face, if you’re familiar with the movie “Star Wars”? Well, this movie has generated a tremendous amount of popularity and enthusiasm about space and science fiction. [ rips open the costume packaging ] This Johnny Space Commander mask here is a pure fantasy toy. I mean, you know, kids can have a lot of fun with a toy like this, you know? Let me show you.. [ puts the plastic bag over his head, then wraps the rubber band around it ] “Hello, hello, this is Johnny Space Commander. I’m in deep space, I’m gonna land the rocket now!” You see what I mean? [ takes off the plastic bag ] You see what I mean? It’s a pure fantasy toy!

This post’s title is adapted from the Chicago Tribune’s obituary for my former neighbor, Tom Ayers. Mr. Ayers lived two doors down after his retirement as CEO of Commonweath Edison. I have a lot of personal remembrances of Mr. Ayers, and remember him very clearly as being tolerant, reserving judgement, and exercising modesty. They went to barbeques, drove GM cars, and bought candy from my brother and I when we sold it to raise money for our baseball teams.

I learned more about Mr. Ayers and his son Bill after we’d left Glen Ellyn and moved to Rochester, NY and throughout college.  As my father suggested, Mr. Ayer’s stature as an industrialist and a community leader influenced my decision to attend the University of Michigan.

I work in a marketing department and receive dozens of unsolicited sales calls each week. One particular salesman has left me multiple messages a week for the past month, often calling daily. I’m not sure if he ever left his company name, but he certainly never  left an introduction or any indication of what service he was selling or what problem it could solve.

He actually reached one of my coworkers and asked her why I wasn’t returning his calls. Apparently he wasn’t getting the message. After he left another message today — name and number only — I snapped and called him back to give him an earful. I told him that he was wasting my time, he had never introduced himself, his company, nor their services. His company’s solutions don’t even pertain to my area, but since he never mentioned what they did, I had to sleuth it on my own. Had he been forthcoming at the outset, I could have directed him to an appropriate party in my company. He then had the audacity to ask if he could schedule some time to speak with me about his company’s offerings. I told him that I had no personal or professional desire to do business with his company, but I did offer up that I would send his email link to an appropriate party at my company. That’s way more than fair.

The irony is that this company, out of Massachusetts, offers “Do not call” compliance services. Apparently I’m not on the list…

11:30 AM UPDATE: The aforementioned salesman called one of my coworkers to tell him I was short with him. So he’s called and harrassed me for almost a month, called one coworker to complain that I’m not returning his unwelcome and unsolicited calls, and called another to complain about me being short with  him on the phone. Now it’s harassment.